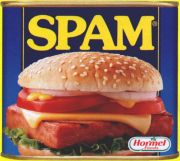 I was overjoyed to find that this week’s SPaM featured blogger, THE WANDERING ATAVIST is a fellow New Englander. I can’t begin to tell you how excited I was to review his posts and actually read the word “Balls!” used as punctuation at the end of a paragraph. Seriously, like familiar music to my ears.

Our friend the Atavist is a self-described “professional adventurer (mostly because it beats working for a living), he’s also something of a cowardly lion, and the biggest klutz you’ll ever meet. The combination makes for a pretty interesting string of… well, the police reports usually refer to them as “incidents.”

I have to admit that when I first did my research I had to look up what the word, ATAVIST means. The Free Online Dictionary lists an atavist as;

(noun) Atavist – an organism that has the characteristics of a more primitive type of that organism.

That got me thinking. How does an “atavist” human learn about the world around him? By utilizing his five senses, that’s how. With his posts entitled…

HOW I DESTROYED AN AIRPORT FENCE IN MY UNDERWEAR

…there’s no doubt that The Atavist should have no problem answering the following questions. I give you The Wandering Atavist’s take on the five senses!

**** 1. During your travels, have you ever seen something you couldn’t explain?

Only when there was a woman involved. 😉 Although, California’s interstate system comes to mind…

**** 2. What are the top three worst things you have ever smelled?

I should start by confessing that I’m just barely house broken. Worse still, I frequently embark on multi-day (multi-week?) trips with five minutes notice or less. When I return to whatever apartment I happen to be in, I often find myself having to play “what’s that smell” around the kitchen. Noodles, left to their own devices in a wet sink for far too long, become an unholy goo. Sometimes, it’s easier just to move out…

Number two would be the woman I helped to forcibly deport from the state of Maine. We drove non-stop to Kentucky, praying that the sleeping pills would last until we got her there. We ditched her and one of the cars just as she was coming to, and then we drove non-stop back to Maine, praying that the Authorities in Kentucky wouldn’t realize we were the ones who’d just given them that problem. That’s the only time I can actually remember my eyes burning.

3rd place goes to a truck full of wildland firefighters after several days on the job in Arizona. On our first fire in Yuma, the temperature peaked at 118 in the shade. And did I mention the world was on fire? After several 18 hour days of hiking, swinging axes, and lugging supplies around with no showers, the stench of a fire crew breaks the Geneva convention. I remember seeing a crew chief not letting a man board a helicopter until he scrubbed up with a bottle of hand sanitizer and the water in his canteen.

Oh- and the rental car I brought back from Florida certainly gets an honorable mention. I left my Scuba gear to mildew for 9 days in a tropical swelter, on the back seat. My co-pilot contributed sea shells she’d plucked from the beach with the critters still inside, and several ready-mixed tuna salad packages she’d let marinade on the floor since the day we left. I’m pretty sure they chalked that car up to an insurance loss when we dropped it off.

**** 3. Based on sound, which region of the U.S. has the most unique dialect or is the hardest to comprehend?

If you trek deep enough into Northern Maine, you’ll come to a lone moose trail that will lead you to the town of Madawaska. The locals, ever fueled by coffee brandy, speak an unintelligible blend of French-Canadian-Quebecois and English. Most of the men there drive 18 wheelers; hauling lobster, lumber, and liquid courage far and wide. But the poor guys don’t get to practice their social skills much on the lonely roads from Madawaska to… anywhere, really. Their accents run so thick that the state police in southern Maine don’t generally stop them.

**** 4. What is the best tasting/worst tasting meal you’ve ever eaten cooked over a campfire?

Best tasting: Chickadee. (Y’know- The little song birds.) What can I say? It was a long, hard summer’s day, and I used to run with a rough crowd. We all had guns before we had cars.

Worst: this is a tough question. Almost everything tastes good over a camp fire. Without exception, my worst culinary disasters occur in the kitchen. One time Sam and I made pancakes with a bag of quick-mix we found buried in the back of the cabinet. They were a bit gamey, but we’d both eaten worse. We just added enough butter and syrup to cover it. Later, we discovered that our bag of “pancake batter” had actually been a long expired “make-your-own-doggie-treat” kit.

**** 5. And lastly have you ever touched anything, like poison ivy or a sea urchin (get your mind out of the gutter, people) that you’ve regretted?

Oh, sure. There’s lots of live electrical wires in my past. Also, you’d be surprised how hard it can be to tell that something is on fire before it’s too late. But it gets much, much worse…

Once upon a time, I accidentally found myself living in a slum in Alaska. There was a blood stain on the mattress where someone (prostitute? Junky? Mailman?) had been stabbed not long before I moved in. But I was compelled to make the situation work, so I chose to believe it was a coffee stain. I covered it with my sleeping bag, and resolved not to touch it. A few months in, I woke up one morning and discovered to my horror that I had somehow rolled off my sleeping bag and was laying face down in that odious stain. BALLS! I ran outside in my underwear and started rounding up bottles of industrial chemicals to douse myself with. I spent several hours soaking in carcinogens and scrubbing at my hide with a rusty wire brush. Yuck!

Next week’s features the one and only sandylikeabeach

Want your own feature SPaM? email me at heellisgoa@gmail.com

Now that this SPaM post is finished it’s time to let you in on some sad news. Sad because my favorite new blog buddy is leaving New England for the balmy shores of Florida. I’d like to think if we had ever met; our conversation would have sounded something like this:

This entry was posted on December 12, 2011 by H.E. ELLIS. It was filed under Humor, SPaM and was tagged with blogs, Comedy, Funny, Humor, interviews, journal, life, musings, New England, ramblings, Random, thoughts, writing.