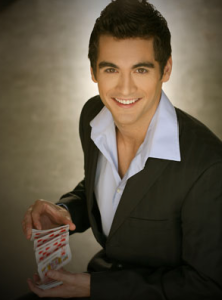 Words can not express the sincere appreciation that I have for Landon Swank and Harmony Swank for taking time out of their busy schedules to come surprise Libby. What a pleasure it was to meet you both.

On Saturday, December 29th Libby had the most amazing experience…Make-A-Wish granted her wish to meet Master Illusionist Landon Swank and his beautiful wif…e Harmony!

For just about two hours my baby girl focused on her new friends and the fun she was having learning some tricks and showing her talents too…fighting cancer was the furthest thing from her mind. It was great to see her smile and giggle and laugh. You both brought so much joy to Libby’s life and for that I will be forever grateful…bless you both.

Anyone who knows Libby knows that she loves card tricks, and anything magic so when she saw Landon perform his audition on the 2011 season of America’s Got Talent she instantly became a fan. Landon finished 5th place; higher than any magician has every placed in the show! She followed the entire season and was thrilled that he made it to the top five but very sad that he did not win.As noted in Landon’s bio, he is referred to by the magic industries insiders as, “Magic’s breath of fresh air”, Swank gives a performance that appeals to the masses. He offers a thrilling journey into the unknown, the unexpected and the unexplainable as it can only be described as The Magic of Landon Swank.

Thank you again “kids” for sharing in our day.

This entry was posted on January 1, 2013 by H.E. ELLIS. It was filed under Uncategorized, Wrists Around The World and was tagged with Agents, blogs, cancer, courage, happiniess, Karma, Libstrong, life, love, Media, mother.