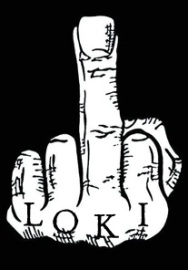 In recognition of April Fool’s Day I scored a rare opportunity to sit down with the God of Mischief, Loki.

HE: “Hello Loki. Thank you for taking time out of your busy day to speak with me and my readers.”

LOKI: “Well, I’ve got a lot on my plate. You do realize what day this is, right? Nice fucking time management there, Chickie.”

HE: *looking at the calendar* “Well, since it’s April Fool’s Day I am going to assume you are joking.”

LOKI: “You would think so, wouldn’t you?”

HE: “I am guessing that April Fool’s Day is the busiest day of the year for you.”

LOKI: “No, that’d be Valentine’s Day. People say a lot of shit they don’t mean which makes for a lot of lies to distribute. Especially to the men folk.”

LOKI: “I’ll tell you what’s sad, having a God like Odin as your step-father. Growing up I never did anything right.”

HE: “On that note, tell us about your childhood.”

LOKI: “What’s there to tell? I was always in trouble since my dickhead brother Thor is a cock-blocking douchebag. I got him back good by convincing Odin that his perfect son wasn’t worthy of living in Asgard so he kicked him out. Now I got the big bedroom.”

HE: “Holy crap! How did you manage that?”

LOKI: “Let’s just say I hid some of our Mother’s more “intimate apparel” in his sock drawer. You do the math.”

HE: “It seems pranking and lying started at an early age. Have any of your lies ever backfired on you?”

LOKI: *laughs maniacally* “No, but the truth sure has.”

HE: “Alright, you’ve GOT to elaborate on that.”

LOKI: “Well, my mouth gets me into trouble, you see. One Thanksgiving I got ripped on Jager and told my whole family off, including my two ex-wives. Every word I spoke was the truth, but it didn’t change the fact I had to transform into a fish and hide in a river to get away from them. Shoulda just stuck to lying.”

HE: “You are known world wide for your practical jokes and pranks. Which prank do you consider your masterpiece?”

LOKI: “Pranks change with the times. I had a blast fucking with the Druids by stacking a bunch of rocks for no reason and then there were those IT virgins who blew their wads worrying about Y2K. That one was a double bonus because it also got the Military’s panties in a bunch sweating random nuclear missile launches. But I’d have to say that the best has yet to come.”

HE: “Are all the pranks you do so grand or do you work on a more personal level with the public?”

LOKI: “At times I like to dabble in the everyday, like when one sock goes missing or when you ‘accidently’ hit Reply All on that email where you trash your boss. But remember, I still have to make a living. Right now I am the major shareholder in Pfizer, a pharmaceutical company that manufactures a little, blue pill.”

HE: “Are there any pranks you regret?”

HE: “What is the one thing you would like the world to know about Loki?”

LOKI: “That I am everywhere. I am a shape shifter, after all. That woman you meet in the bar that is too good to be true? She probably is. Just sayin’.”

Return April 20th  for our exclusive interview with The Easter Bunny!!!