In honor of the season I’ve decided to tackle the topic of horror movie villains. Since no one loves a good horror flick more than I do, I’ve decided no Hellis list could be complete without my ten personal favorites. I give you:

THE TOP TEN SCARIEST HORROR MOVIE VILLAINS OF ALL TIME

Now I know there will be a great deal of debate here because like sex, what scares someone is just as subjective as what makes them feel good. The list below features what gets inside my head and pounds my fear button like a monkey on crack.

For those of you who have never seen this movie, DON’T. I’ve tried to watch it three times and have never been able to make it past the first thirty minutes. Don’t say I didn’t warn you.

Even though I saw this movie as a kid, when people dress up like this particular incarnation of vampire today I am freaked the fuck out. Not bad for a movie made in 1922.

I have to admit that I have never seen this movie. I saw this commercial on television as a kid and it scared me so much that thirty-five years later I’m still freaked out enough to include it on this list.

Though never technically given a name in the SAW series, the puppet known as “Billy” scares the beejezus out of me. Thanks to him I can’t be within ten feet of a tricycle.

I’d like to remind you all that the move “IT” was made for television and not a mainstream horror movie. None the less, simply mentioning the name “Pennywise” to anyone who’s seen it will bring about a shudder. That is a testimony to the acting ability of the great Tim Curry. I found the scariest moments weren’t the scenes where he had huge dripping fangs, but the ones where he is simply…smiling. 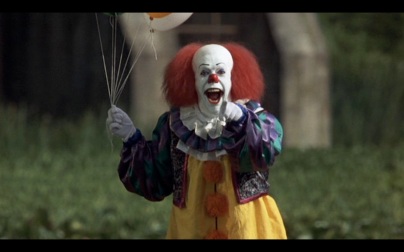 The least offensive thing about this character is his nearly New England level usage of the word “fuck.” This sociopath rapes, tortures, and mutilates all while huffing amyl nitrate and switching back and forth between two different personalities he refers to as “baby” and “daddy.” This movie should be watched with a Pollyanna chaser just to get the bad taste out of your head.

Max Cady isn’t your ordinary everyday grudge stalker because this dude isn’t content to come for you, he’s coming for your daughter. My apologies to purists because as much as I loved Mitchum; DeNiro’s version of Max Cady was far more sadistic to me.

Cheating husbands and bunnies be warned; this deranged stalker will NOT be ignored. 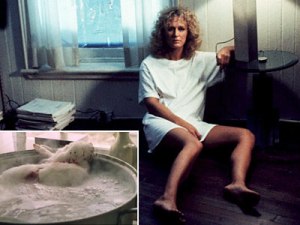 A novelist with a kickass car meets his biggest fan. You do the math on why I put it so high on my list. 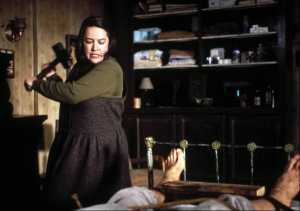 1. Buffalo Bill – SILENCE OF THE LAMBS

I know what you’re thinking and yes, Hannibal Lecter was the shit. But he’s not who scares me here. Above all others, the character that freaks me the fuck out most is Buffalo Bill. Because you think he’s normal. But make no mistake, Bill doesn’t want to rape you or torture you, he wants to BE YOU. It’s the ultimate insult to your humanity. There is nothing in the world that frightens me more than another person strutting around inside a Hellis skinsuit.

To this day the following song sends chills up my spine:

This entry was posted on October 9, 2014 by H.E. ELLIS. It was filed under bOnErRiFiC, Humor, THE HELLIS 100 and was tagged with celebrity, Comedy, Entertainment, Humor, Media, Quotes, Sex, thoughts, writing.