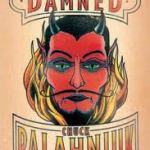 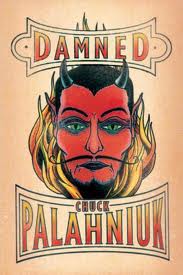 This is the opening to Chuck Palahniuk’s novel DAMNED, a story about an angsty teen dead girl and her journey through Hell. Or more accurately, the story I’d have written if I’d been, you know, a better writer.

My new years resolution to make my writing a priority ended the moment I finished the book DAMNED, and was forced to face the reality that my writing sucks balls compared to Chuck Palahniuk’s.

I’d like to tell you this revelation prompted me to get busy on a book of my own, working with all the drive and ambition of a writer inspired by Palahniuk’s genius to, as Neil Gaiman put it, “Make good art.” But it didn’t. Instead I curled up in a ball and cried like the giant hack baby that I am. I also haven’t written a word since.

That’s because I have my own personal cock-blocker, and his name is Chuck Palahniuk.

So why all the literary flacidity, you ask? Well I’ll tell you why.

[I’m going to give you my answer at the end of this next passage because it builds suspense. It’s a technique good writers use, or so I’ve heard]

The book world is filled with writers whose work makes me feel like I’ve been junk-punched in the literary genitals. One of them is James Ellroy. Take for example the opening of his pulp-fiction inspired novel, L.A. CONFIDENTIAL:

“An abandoned auto court in the San Berdoo foothills; Buzz Meeks checked in with ninety-four thousand dollars, eighteen pounds of high-grade heroin, a 10-gauge pump, a .38 special, a .45 automatic and a switchblade he’d bought off a pachuco at the border—right before he spotted the car parked across the line: Mickey Cohen goons in an LAPD unmarked, Tijuana cops standing by to bootjack a piece of his goodies, dump his body in the San Ysidro River.”

Only Ellroy can write a 78-word sentence about grizzly murder and police brutality and craft it to read as high poetry. In lesser hands this opening would have been a disaster. I am sure if I were tasked with the challenge of writing this novel I’d have Bucknered all over it (for all you non-New Englanders out there scratching your collective heads at the word BUCKNER, click HERE and feel my pain).

Another dream-crusher is Chuck Bukowski. Take for example his poem SOME PEOPLE:

some people never go crazy.
me, sometimes I’ll lie down behind the couch
for 3 or 4 days.
they’ll find me there.
it’s Cherub, they’ll say, and
they pour wine down my throat
rub my chest
sprinkle me with oils.
then, I’ll rise with a roar,
rant, rage –
curse them and the universe
as I send them scattering over the
lawn.
I’ll feel much better,
sit down to toast and eggs,
hum a little tune,
suddenly become as lovable as a
pink
overfed whale.
some people never go crazy.
what truly horrible lives
they must lead.

I doubt Nicholas Sparks ever wrote a poem like that, the epic tool. Now I’ll admit that Bukowski is not for everyone, but personally, I cannot get enough of him. Seriously people, I hear Roberta Flack’s voice inside my head whenever I read his work. Whenever I read my stuff all I hear is Bobcat Goldthwait.

I admire Stephen King for his mastery of characterization and worship Neil Gaiman for, well, everything, but Chuck Palahniuk is the only writer who ever made me WANT to write. His literary voice and story lines are so eerily similar to mine that I have to wonder if we are related somehow. For me, reading one of his novels is like reliving painful childhood memories spent with a better-looking, ultra-talented sibling, feeling the push-pull of striving to be like him only to hate him when I fail in comparison. Now I truly know how it feels to be an Oakland Raiders fan.

So at the end of the day what does all this self-contemplation/flagellation mean? Why it means I am an insipid douche-bag writer, that’s what it means. It means that instead of wasting my time lamenting why I will never be as successful as my heroes, I need to get busy, you know, writing. It means it’s time to get my head out of my ass and get my ass to my desk. 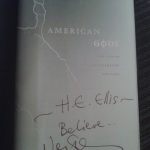 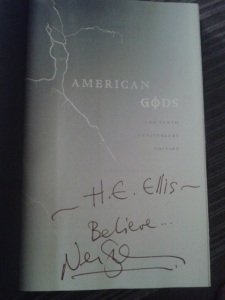 I’ll admit that it’s been a while since I’ve visited blogworld, but this time I have a good reason:

That’s right; I met honest to goodness Neil Gaiman at a book signing for his latest creation:

THE OCEAN AT THE END OF THE LANE

I, along with about 100 other lucky individuals, sat enraptured for two hours listening to him speak about his new book and his old books and what it means to be a writer. I gladly waited another three hours in line just to have him sign my copy of American Gods- three hours I spent rehearsing what it was I would say to him when I finally, after twenty years of fandom so intense it is almost embarrassing, had the chance. Here’s how it went:

NEIL: [reading the post-it with my name on it stuck to my book] “So you are H.E. Ellis, then?”

NEIL: “It is wonderful to see people using initials again.”

[Neil hands me my book]

[I turn and walk away]

I am sure there was drool involved, not to mention I’d been sweating inside a church for five hours and probably smelled like Texas roadkill.

Even if he were offended, I am sure he would never say. Neil Gaiman is without a doubt the most soft-spoken and humble celebrity I have ever encountered. This man makes himself available to those who come out to see him (those who don’t become catatonic at the sight of him anyway) and never behaves like the diva he has earned the right to be. I harbor no delusions that my writing will ever receive the acclaim his has, but I will tell you with certainty that I will do my best to, “Make good art,” simply because I was blessed with the opportunity to receive his advice.

Return tomorrow for a blog post about what I did the NEXT day. Until then, MAKE GOOD ART.