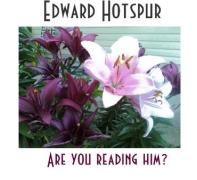 It’s time for another interview with a member of THE TWISTED FICTIONEERS, a group of authors who collaborate on charity writing projects such as ICONIC INTERVIEWS and F*CKED UP FAIRY TALES. Every Wednesday and Saturday we will feature an interview from a different author who has contributed to our writing ventures.

Since today is none other than Edward Hotspur’s birthday, I thought it fitting to feature his interview and get a glimpse into the mind of this blogger extraordinaire. For those of you out there who reside under rocks and who may not know, Edward Hotspur has written everything from a disenfranchised Tom Turkey to shameless Elf Erotica to all points and posts in between. His STORIES blog page alone is enough to keep a reader busy straight through to the Rapture. Luckily for us, we won’t have to wait that long to find out what makes the great EH tick. So raise your glasses and toast another year to:

When did you know you wanted to be a writer?

When I could imagine.

Do you prefer to write in a specific genre and if so, why?

I would prefer to – however, my brain won’t let me, which is why I have a hard time finishing anything. I can write posts, but they are all over the place, as you can tell from my blog.

What techniques do you use when crafting your writing day to day that keeps you focused on the plot and storyline?

During successful writing times, I totally visualized the scene, and visualized myself as the main character in that scene, then just described what I saw and how I felt. Another technique is to take a real situation, and make it absurd. Sometimes in life you can do that without much tweaking.

Many readers will probably be offended by F*cked Up Fairy Tales and/or Iconic Interviews. What is your message behind the irreverence?

Mine was “OH MY GOD I’M WRITING FILTH!” – which I tried to disguise as ‘dirty and monogamous need not be mutually exclusive’, or ‘romance is extremely sexy’, or something… hey! Look over there!

What is the most challenging aspect of the mechanics of writing for you, and how do you overcome it?

I can write all day long in short bursts. I can hit publish. I can’t seem to edit for books, and that’s why I have enough stuff for 10 books, but only have basically one done, and that only electronically.

There is art and science involved in writing. What is your favorite aspect of writing in the context of its art?

Describing the scene. Freedom to create. Spaghetti on the wall technique.

Ten years from now, what are you writing?

And now for a little something extra we bring you…

1. What would you consider to be your best personality trait?

Stubbornness. Persistence is an incredibly powerful tool, but….

2. What do you think is your worst personality trait?

Stubbornness. …when it crosses over into ‘going for the kill’, it can be bad.

3. You wake up Saturday morning and everyone has left you alone for the day. What do you do?

Things that I can’t do with a bunch of people in the house. Typically things that involve shutting off the water, the power, or both.

4. Name one person, living or dead, who you’d like to take to dinner:

Sidney Poitier. No, seriously, my wife. We rarely get that chance.

5. If you could choose a superpower, what would it be and why?

Hard to say. Time travel would be nice, but so would healing, speaking any language, or immortality.

6. If you could live anywhere in the world, where would it be?

Assuming that certain conditions existed, I’d live in Florida, and have houses in England and Japan.

Book – hard to say. Impossible. Meal – steak, because rare. Getting steak, not the condition of the steak. Sport – Child rearing. Wait, what?….. Oh, okay. Then I like hockey.

8. Your favorite movie/food/song that you secretly like but don’t want to admit:

There are no songs that I like that I wouldn’t admit to liking.

“James Lipton.” Just kidding. It’s ‘fuck’, including all its variants.