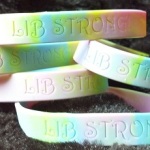 Now that I’ve got your attention I’d like to make you aware of an ongoing project I’ve been spearheading that I am hoping you’ll want to be a part of. It’s a project to benefit a cause that’s close to my heart called LIBSTRONG, a community of friends who have gathered together in support of Libby, a dear young friend who is battling cancer.

We’ve put together a surprise project called WRISTS AROUND THE WORLD not only to raise money but to raise her spirits as she battles her illness. Keep reading to find out what it’s all about and to learn how you too can be involved:

From the WATW site:

Our latest endeavor is called WRISTS AROUND THE WORLD- a fun global project designed for people everywhere to show their support for Libby and her battle against cancer. Bloggers and non-bloggers alike are invited to purchase her LIBSTRONG wristbands and then snap pictures of their wrists against an iconic landmark of their city, state or hometown. Once the photo is taken it is emailed to us and then posted to our GALLERY.

The message behind our project is to show the world how Libby’s strength and determination touch more than just those around her. Her positivity reaches around the world!

When sending a picture please include information noting where the picture was taken. We would be happy to post your name or a link to your blog, although that is not necessary and we will respect all wishes for anonymity. We are requesting snapshots be of wrists wearing wristbands only, so even the most camera shy supporter feels comfortable enough to be involved.

LIBSTRONG wristbands are available for sale individually or in package deals combined with items donated from various blog supporters. Visit our MAKE A DIFFERENCE page for information on how to purchase the package that’s right for you!

To be a part of WRISTS AROUND THE WORLD send your snapshot to:

I am asking my fellow bloggers everywhere to purchase at least one wristband not only to raise some much needed money for Libby’s cause, but to show her your support from your very own hometown. Package prices include shipping within the United States only. Since I would like the wristbands to actually go around the world, I would be willing to donate both of my ebooks for free to anyone outside of the United States who purchases even just one LIBSTRONG wristband to offset the cost of shipping which would be the responsibility of the purchaser.

As of the writing of this post, Libby doesn’t know about this project. We’d like to get as many pics around the world as possible and then reveal her site as a gift.

As for my part in the WRISTS AROUND THE WORLD project I’ve decided to donate both my REAPERS WITH ISSUES and THE GODS OF ASPHALT ebooks and paperbacks to be included in wristband package deals. I am also including the blog compilation project F*CKED UP FAIRY TALES for donation once it is completed. Each contributing author’s name of that work will receive an honorary mention on the FRIENDS OF LIBSTRONG page with links to their blogs.

Additionally, if you are an author you can contribute by donating your own books for package deals to be included on their site. For ebooks simply donate a free coupon for your book that others may purchase to raise money for our cause. For information on paperback donations, please contact wristsaroundtheworld@gmail.com for more details.

Thank you everyone for taking the time to stop by Wrists Around The World!